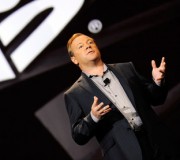 Some hackers say Sony wants to deter customers from modifying the PlayStation3. Is that true?
No, there’s a real misnomer there, we embrace independent game development; if you call that hacking, then we embrace that. We give people tools that let them create new experiences. What I don’t think we are in support of is someone trying to hack our device to pirate software and possibly collapse the platform.

Hi, I have just read your one-on-one interview with Jack Tretton at http://bits.blogs.nytimes.com/2011/06/13/one-on-one-jack-tretton-sony-c-e-o-america/ And I’m shocked and infuriated at his answer to your third question :

Some hackers say Sony wants to deter customers from modifying the PlayStation3. Is that true? No, there’s a real misnomer there, we embrace independent game development; if you call that hacking, then we embrace that. We give people tools that let them create new experiences. What I don’t think we are in support of is someone trying to hack our device to pirate software and possibly collapse the platform.

This is a complete lie, and Mr. Tretton is being dishonest with you and with your readers. The world needs to know the truth: Sony has been hard at work to prevent customers from modifying their rightfully owned Playstation 3 system and this has absolutely nothing to do with piracy. It is almost a similar situation to the lawsuit from Sony about AiboPet who wrote software to make the AIBO robot dog do tricks that weren’t programmed in it initially. Was that about piracy or about control ?

They sued George Hotz for opening up the console to homebrew while he expressly did not allow any piracy on his jailbreak (to this date, no one can pirate games using his jailbreak method).

They also sued and raided Alexander Egorenkov’s house twice and he is still being sued (no settlement with him) for the work that he has done, which had absolutely nothing to do with piracy, ALL his efforts were for the sole purpose of restoring Linux support to the PS3, which was an originally advertised and available feature of the PS3 and that Sony illegally removed from our device. He is being sued for writing patches to the Linux kernel and for writing drivers for Linux. Is that what Mr. Tretton calls “we embrace that” ? They have also been sending Cease and Desist letters and threats to anyone who has been involved with the PS3 hacking scene and homebrew (independent game) developers. Using those scare tactics to repress the community is not the best way to ’embrace’ it. Also, it is not possible for any homebrew developer to create and develop for the PS3 without proper licensing from Sony, which requires them to buy a dev console for 10 000 or 25 000$. Sony are not embracing independent game development, on the contrary, they are the only ones out there who are not. While Apple has the App Store, Google has the Android Market and Microsoft has the XBox Live Indie Games program, Sony are the only ones who have not embraced the homebrew community and who are not allowing us to use our consoles the way we want to. In their lawsuit against George Hotz they had the audacity of saying that it is not our console, it is theirs, that we are merely ‘renting’ it from them, they own it even if we bought it, and that trying to access our machine is the equivalent of a cracker trying to hack into a ‘third party, remote, secure computer’.

I have started a few weeks ago a petition asking Sony to give us an official and legitimate way of developing and running homebrew games on the PS3, you can find it here : http://humblehomebrew.com. Many people are signing the petition, but the only answer we receive from Sony is an automated response message stating that “Our policy on this issue has not changed. We are therefore not in a position to fulfill your request.”. Again, this is in contradiction with what Mr. Tretton said about “embracing independent game developers”.

It has to be known that this is also why they are getting targeted by all their hackers, it is because of how they are oppressing the developers of the world, how they sued George Hotz and how they sued and raided Alexander Egorenkov’s house. But mostly, it is for how they abused the law and how they reacted during the lawsuit. And this is not only about saying that the machine that we bought and that we own is actually theirs, but also, for example, the fact that they sent subpoenas all over the place to get as much information about anyone and anything that dared look at the Playstation 3 the ‘wrong way’. They tried to access everyone’s twitter, youtube and paypal accounts. They wanted to get all the information on all the transactions on everyone connected to those transactions on the hacker’s paypal accounts, whether it was relevant or not. They wanted to get the IP addresses (and thus, be able to identify and potentially sue) of every single person who watched a video on Youtube. They sent all of these subpoenas after the judge rejected them, hoping to still get some information before the judge notices, they also sent them without telling the subpoenaed parties that they have a right to quash. The Judge had to force the lawyers to contact every party and withdraw the illegally sent subpoenas.

This is the reason that they are being hacked, it is because of how they abused the law, how they threatened everyone and because of the lawsuit that is still in progress against a security researcher and Linux developer.

The hacker community is outraged at Sony’s actions and this is how they are reacting, they are fighting against Sony’s oppression of our rights to free speech and our right to our property.

I believe that your readers have a right to hear the truth and not only a one-sided argument from the CEO of the company. Please update your post or write a new one with details about what is really going on, if you need or want any more information, feel free to ask me anything you’d like concerning this issue and it will be my pleasure to answer you and give you all the relevant links and documentation to back anything that I’ve said. Thank you for your time, KaKaRoTo.